If you live in or near Kamloops, please come to my reading at the library tonight at 7. I'll preview my zombies-in-Nebraska book and rap (this part has nothing to do with Nebraska) in the character of Captain Cook, who has a nearly-indecipherable Yorkshire accent. 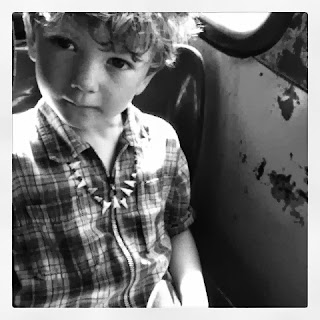 This is a photo from last December of one of my kids, and has nothing to do with tonight's extravaganza.  See you there!
Posted by Adam Lewis Schroeder at 09:27 No comments:

On my website proper, which hasn't been updated in eighteen months or two years, the poor thing, the topmost news item claims that Douglas & MacIntyre is going to publish my third novel, All-Day Breakfast, in September 2012.  Man, that is wrong and sad.  After I posted that announcement, the book went through various delaying edits (well, we didn't just make edits for the sake of delay, there were good reasons) which backed up the release by another six months or so, then in October 2012 D&M declared bankruptcy, so all possibility of publication went off the rails.  "September 2012"?  Wrong and sad, right?

Until Harbour Publishing bought D&M's assets in February 2013 -- maybe I've phrased that incorrectly in terms of intellectual property law, but, anyway, Harbour is now the future publisher of All-Day Breakfast, with a proposed release of Spring 2014.  This is proper and good.

And now the treat for you: in June 2012 I made a trailer for the novel, with the help of family and writing students and neighbours and a drum set and some dolls from Value Village, in anticipation of the book's 2013 release.  I think now that it runs too long in the middle, but the laptop I used to cobble the thing together has since fizzled, so rather than just chop the exisitng version I think I'll start an all-new trailer in the next six months or so.  One with a lot more dancing.

Crank up the volume, make the screen big: